“In sum, this is a most valuable addition to the growing body of Elliott Carter literature.”
—Edward Jurkowski, Music Library Association Notes

“...a collection of over a dozen expertly-wrought essays amounting to a highly useful in-depth survey and summary of Carter's achievement.”
—Mark Sealey, ClassicalNet 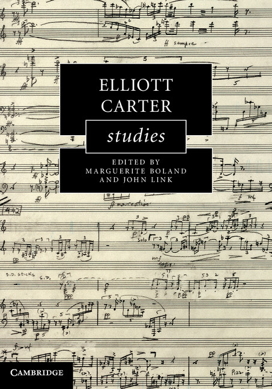 Over the course of an astonishingly long career, Elliott Carter has engaged with many musical developments of the twentieth and now twenty-first centuries—from his early neo-classic music of the interwar period, to his modernist works of conflict and opposition in the 1960s and 1970s, to the reshaping of a modernist aesthetic in his latest compositions. Elliott Carter Studies throws new light on these many facets of Carter's extensive musical oeuvre. This collection of essays presents historic, philosophic, philological and theoretical points of departure for in-depth investigations of individual compositions, stylistic periods in Carter's output and his contributions to a variety of genres, including vocal music, the string quartet and the concerto. The first multi-authored book to appear on Carter's music, it brings together new research from a distinguished team of leading international Carter scholars, providing the reader with a wide range of perspectives on an extraordinary musical life.

Also available from Amazon, Barnes & Noble, or your favorite bookseller.